Beer of the Week – Wayfarer USA 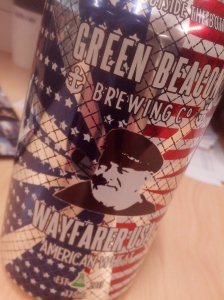 Where did it come from?: Green Beacon Brewing Company in Brisbane. I meant to visit the brewery while I was up there recently for my birthday but ran out of time.

What’s it like?: Apparently this is a sort of replacement for Wayfarer Wheat, which was a hefeweizen style. This beer – as the name implies – is more of a US style. So there’s some sweet, gentle lemon and tropical fruit aromas and flavours here. And the use of the wheat gives it a nice soft mouthfeel.

Why do you like it?: I’ve liked this beer – and the other beers in the Green Beacon range – ever since I saw a picture of them. That’s because they come in cans and I like beer in cans godammit. Despite the words on the can that say I should drink this in a glass, I sampled it straight from the can. And it was lovely – after a hot day in Brisbane walking around and seeing stuff, drinking this in the airconditioned comfort of my hotel room was lovely.

Okay, now you can tell the story you think is funny/interesting?: For ages I thought this brewery was based in the Canary Islands and not in a suburb of Brisbane. That’s because of the letter F. See, one of the Canary Islands is called Tenerife, while the Brisbane suburb is Teneriffe. Confusing, huh?

Anything else?: Yep, I bought a four-pack of this, the 3 Bolt Pale and Windjammer IPA, but only one can of their kolsch. Because I hate kolsch. That was a mistake – I loved the kolsch. So much so that, had I taken any notes on it (or bought a bloody four-pack) it would have been the Beer of the Week.