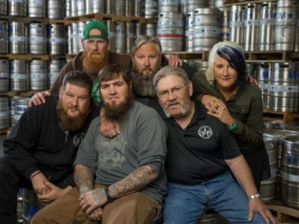 Even though it’s my birthday today (yes, truly. It is) I’m giving you a few presents.

Well, presents are only for those of you with Foxtel.

I’m giving you the heads-up on a few beer-related TV shows airing on the A&E channel.
First up is Dark Horse Nation, which actually airs tonight.

It’s about a real-life brewery that’s been going in Michigan since 1997. It’s partially about beer but – oddly enough – partly about making weird-ass shit like a fishing shanty on tank treads.

Here’s the first ep in its entirety, totally pinched from YouTube.

The other A&E show is Bar Rescue. It’s been around for a while but I’ve never heard of it before (but hands up who has heard of every single show airing on Foxtel these days). The third season kicks off on January 21.

Seems the basis of the show is like the Gordon Ramsay’s Kitchen Nightmare series where he tries to save someone’s crappy restaurant. Except in Bar Rescue, they’re saving bars and pubs.

It’s not just about beer, but rather alcohol. Still, us beer geeks like bars.

Here’s an earlier episode of the show.

See these Lindt chocolate balls? Well they're going into a cheesecake today.