Some beers at Bentspoke

The downstairs bar at Bentspoke Brewery.

My wife comes from Canberra, which means I’ve made an awful lot of trips to that city in the last 10 years – first to see her and then later, to go back with her to visit her family.

And how often did I visit the Canberra beer institution Wig and Pen in that time? Twice. Just twice. A pissweak two times. There were 7-Eleven outlets I visited more often.

How does this happen? Well, because for most of that time I didn’t much care for good beer so had no impetus to go there. And when I did care very much for good beer, most of our Canberra visits were consumed with catch-ups with parents, relatives and sundry friends.

As much as I might like to, saying ‘‘honey, instead of going to visit your mum, why don’t we go sink some beers?’’, is not going to go down well. At all.

But with a Christmas visit on the cards I got in early, staking my claim to a visit to Bentspoke Brewery, the new place opened by former Wig and Pen brew guy Richard Watkins. Yes, it meant we’d meet some relatives there who don’t really care about beer (which is no problem, aside from the fact it means I have to rein in my extreme beer geek tendencies and have conversations about other things).

Bentspoke – named for Watkins’ and partner and co-owner Tracy Margrain love of cycling – opened for business in June. But it wasn’t until November that Watkins managed to brew enough beers to fill all 18 taps.

Yep, there’s 18 beers on tap (well, 17 and a cider) – all of them brewed on the premises. That fact alone boggles my mind – that’s a crapload of work to get 18 beers brewed and through the taps.

And, based on my selection, they’re pretty fine beers too.

I started off with a tasting paddle (or given the biking them and the look of the tasting tray perhaps ‘‘tasting pedal’’ is more appropriate). 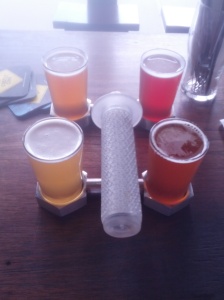 That included a sublime Christmas themed beer called Spicy Baubles, pushed through the Modus Hoperandus (aka a randall) filled with cherries, lemon, ginger, cacao nibs and vanilla. Were I not catching the bus back home on Sunday afternoon already overloaded with stuff, I’d have bought a growler of this to take home. Sooo goood.

Also tasty was the schooners of Heat Freekah farmhouse ale and the lovely gently smoked rye IPA known as Gooseneck.

I had to stop at the Derailleur because the sucker was 8.4 per cent and I’d didn’t want to be smashed in front of the rellies. That was a great number two, brewed with a hop called US291 and a dose of Bret.

I didn’t take any detailed notes of flavour – or any notes at all. Taking notes is one of those things I class as ‘‘extreme beer geek tendencies’’ so I’m just left with a thumbs up or down. And they were all thumbs up.

Same goes for the food, which is definitely a cut above standard brewery fare – but it doesn’t come with a hike in prices.

The venue itself is a two-storey affair, though we stayed downstairs (I understand upstairs is a bit more formal). There’s a slightly industrial theme in the decor, which means all those steel fermenters fit right in.

There’s the option of taking a seat at high tables inside, or at the low ones out on the footpath. Those outdoor seats were full on a warm afternoon in December but my wife’s family reckons they’d be empty come the cold Canberra winter.

Perhaps only the hardened beer geek will rug up and sit outside then. While I might like that, my wife won’t. But on the upside, she really liked Bentspoke, which greatly increases my chances of getting back there again.

And I desperately want to get back there again.