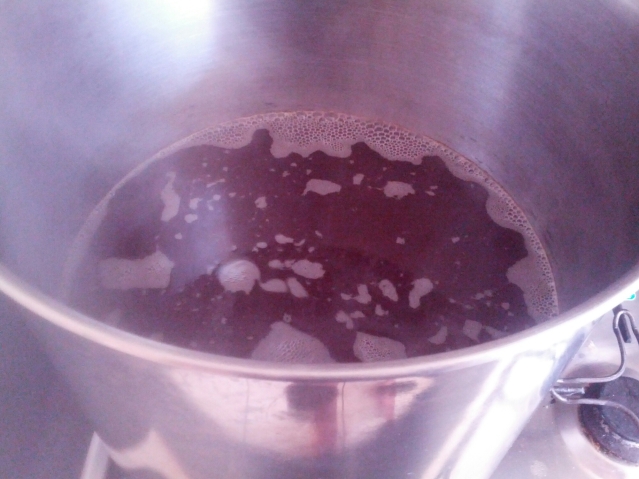 Here’s a sentence you won’t read all that often – my wife made me brew a batch of beer on Saturday.

It’s a true story. Oh, okay, it wasn’t like she was cracking the whip and demanding I do it. And I didn’t really need to have my arm twisted either.

But I hadn’t brewed for nine months, a decision I came to because I already had enough beer to drink and making more just seemed like a big waste. After all, I’ve had homebrew sit in bottles for several months and I can tell you the flavour tends to diminish in that time (I also held one bottle of each brew to try a year later as an experiment. Which was a stunningly dumb idea for someone who brews pale ales and the like. They just age like crap).

The other reason I had a hiatus? Well, brewing takes a load of time; even when you’re just a partial masher like me. And that’s not even counting the time spent bottling. I like beer but I’d just gotten sick of the hours making my own ate up.

However, with the weather warming up my wife wanted me to make ‘‘her’’ beer. That’s a Stone and Wood Pacific Ale-like beer I made for my wife about two years ago. Even named it after her – Summer Girl.

I’ve made it the last two summers and she’s loved it. So, with summer coming up, she was all, ‘‘when are you going to make that again? You ARE going to make that again, aren’t you?’’. Well, yes I am. Brewed it on Saturday – and let me tell you, brewing beer isn’t like riding a bike. I had to pull out the step-by-step brewing guide I used for the first few brews because I was so rusty. Rather than doing everything automatically, I had to really think through every step I didn’t screw up the beer.

And I really didn’t want to screw this up. Partially because my wife would be unhappy but also because it’s my favourite beer of all the ones I’ve made too. It’s the one a professional brewer raved about. And it’s the one that scored me a first-place in the Australian pale ale section at the Nowra Show (and one day I hope to actually get that certificate).

Funnily enough, the experience of brewing again has got the creative juices flowing. When I bought the ingredients for Summer Girl, I also bought a wort kit made by HopDog. The idea is to pour some of it into several different fermenters and chuck a different yeast into each of them. By using the same base, I hope to be able to see (well, taste) what difference each yeast makes.

The downside is that it will mean more work for me – it’s three fermenters to clean instead of one. Still, it should be interesting.

I need to get up. But don't want to wake her. Damn.