Beer of the Week – Robot Ninja 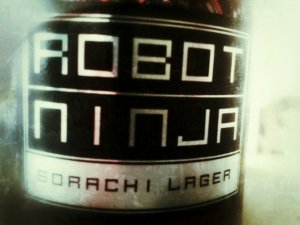 They were two circles that represent two separate groups but the overlapped where those groups shared common traits.
You ask me, if you had one circle for beer geeks and another for sci-fi geeks there would be a sizeable overlap of those two circles.

From my observation there seems to be a lot of sci-fi geekery in the beer world. People going on about Dr Who, Battlestar Galactica, Star Wars or whatever the hell sci-fi thing is really cool (yeah, you guessed it. I’m not a sci-fi fan).

So I have to think the guys behind Robot Ninja went with that name to hook the sci-fi geek/beer geek crossover. Come on, it sounds like the name of a ‘‘cutting edge’’ sci-fi comic book. Hell, I’m not a sci-fi fan and the name hooked me. And I’m glad it did, because it is a tasty lager.

But it might have hooked me anyway because it uses the sorachi ace hop. That’s a hop which seems to polarise people. You can’t be just ‘‘meh’’ about it – you have to like it or hate it. Me, I like it. I like that unusual dusty lemony flavour. I’ve found it refreshing in every beer I’ve had.

And the Robot Ninja is no exception.

Weird thing though, on Untappd a bunch of people are checking it in as though it comes from Kooinda. Which it doesn’t – it’s actually the product of a wine warehouse in Collingwood. At least that’s what the address on the label relates to.