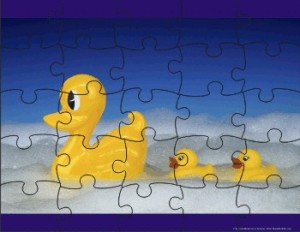 My geographical knowledge of Sydney is like this jigsaw puzzle. Except for the fact that it’s put together. And that it features ducks.

Thing #1: Beer is a great way to explore your surroundings

Honestly, I’m crap at geography. When I play Trivial Pursuit it’s the category I always struggle with. I see those YouTube videos where Americans are asked to point to certain countries on a map, failing hopelessly, and I laugh. But then admit to myself I am a disgusting hypocrite because I would likely have similar problems.

It’s an affliction that leads to me having a very limited idea of where everything is in Sydney. I’ve been up there quite a few times in my life but each place is like a separate jigsaw piece in my mind. And I often have no idea how they join together.

So I go from my place to somewhere in Sydney I know that location, but I tend not to register all the other locations nearby. If I later have to go to one of those other nearby locations, I have to look at a map to see how to get there, and it ends up as another puzzle piece

Last Saturday I was in The Rocks – firstly at Harts Pub and then at the Lord Nelson. I had to leave the Lord earlier than planned, because a bunch of guys on a T-shirted pub crawl. One of my beer rules is to get  out of a venue when a T-shirt pub crawl arrives. Not so much because of any fear of drunken violence, more because guys on pub crawls tend to be annoying dicks with the mistaken belief they’re hilarious.

So I’m gone. But I wanted to go to check out the King Street Brewhouse, where Shenanigans have their beer on tap. I’d been there before, when it was a James Squire pub, but it was on a separate puzzle piece so I had no idea how far away it was.

Looking at Google Maps on my phone (which is a step up – I usually print out the maps and carry them around as hard copies), I realised to my amazement, it was a virtual straight line south from one to the other. And less than a kilometre walk away.
And it was in the general direction of my hotel (which was only three blocks from the brewhouse – something else I didn’t know). Also, through trips to Red Oak and Sweeneys over the weekend, I was also able to join up the jigsaw pieces from my hotel at
Wynyard down to Town Hall.

I still don’t like geography much, but pairing it with beer does make it more enjoyable.