Beer of the Week – Oktoberfest

It might be uncool for a beer geek to say but I’m not a fan of Oktoberfest. 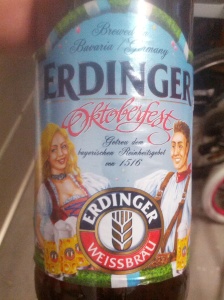 I’ve been to a few beer (and wine) festivals in my time and they were all better than the one time I went to an Oktoberfest event.
The place was just full of drunk, sweaty, red-faced 20-somethings dressed up as ‘‘Germans’’. I put that in inverted commas because it seems no actual Germans see the need to dress up in some shitty $8 costume they bought from the Reject Shop.

I was there covering it for work, so I finished the free beer the organiser gave me and left.

Speaking of beer, I’m not even a fan of most Oktoberfest beers. They all seem to be marzens, which is one of the few styles that I’ve drawn a line through.

But there is one exception. An exception that absolutely the only thing I like about Oktoberfest. I’m talking about the Erdinger Oktoberfest beer. As the name would suggest, the beer is only available this time of year. And man do I love it. Even the bright blue label featuring smiling Germans make me happy.

My local Dan Murphy’s stocks it and every time I go in there, I pick up a bottle or two. Because I’ve already drunk the ones I bought last week. That almost never happens – if I buy a beer it usually sits in the cellar for a week before I open it. There’s no logical reason why I do that – I just do.

Part of the reason I like it is because I like hefes and wheat beers. The other reason is that, come the warmer months, the slightly sweet beer with notes of banana and spice is so goddamn refreshing.

Compared to this, all those crappy marzen beers just feel stodgy.

Now if you’ll excuse me, I need to go and buy a few more bottles before they’re all gone.