I’m pretty happy with myself about this Session. See, I’d totally forgotten about the last few Sessions until the day

they were due to be posted, so I had to bash something out in a hurry to take part. But this session – hosted by Boak and Bailey – involved traditional beer mixes.

Their whole idea was ridiculously simple – try a traditional beer mix and write about it. Obviously that involved some preparation and wasn’t something I could cobble together on a Friday. I’m pleased with myself because I remembered the Session was coming up, tested a few beer mixes and even wrote this ahead of time.

Oh yeah, I should explain what the Sessions are.  One the first Friday of every month bloggers all write about a topic that has been determined in advance by that month’s host. This month, that would be the aforementioned Boak and Bailey. They gave a list of traditional beer mixes and asked us to choose one, try it and write about it. But later in the post they suggested we could be experimental.

And so experimental is what I did – opting to try three different versions of a black and tan – all featuring Australain beers and each pairing from the same brewery. I’ve chose to write about them in the reverse order to which I tried them, because the first one I had was the best and it was downhill from there. But that seemed like a bummer so I thought, let’s start with the worst and get better.

I’m not at all happy this was the worst. I wasn’t a big fan of this barleywine when it came out last Christmas. Neither was anyone else, it would appear, as it got savagely marked down in price – to just $5 – a few months later. I thought ‘‘Bargain!’’ and bought six bottles, figuring they would get better with age. Well, six months on and it’s still got the same overly sweet character I didn’t like in the first place.

Also, as I picked an English style of an IPA it wasn’t strong enough to balance out the flavours of the barleywine. So I got a stack of that icky barleywine but not much of the Devil Dodger – which I actually like as a beer.

Now I just need to work out what I’m going to do with the other five bottles of this barleywine.

This black and tan pairing, from Australia’s original craft brewery, was better in terms of flavour but the darker beer overpowered the lighter one.

The bulk of the flavour was provided by the coffee stout notes and the only real presence of the pale ale I could detect was the legendary Coopers yeasty notes on the nose.

These two beers are ones I reckon I’d rather drink separately rather than together. 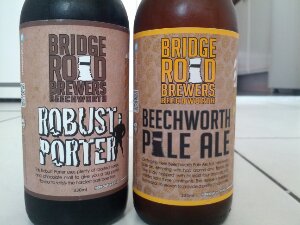 I should point out that I’m not really one for beer mixing, cocktails or whatever you want to call them. As seen above, the risk of coming up with a drink that is less than the sum of its parts is too great. If I like the two beers on their own, why risk combining them and finding out I don’t like the new creation?

But I can see it has its benefits – especially when it leads to a great match like this. I love both of these beers on their own and I love them together. Unlike the other two, this combination really features aspects of both.

I got the coffee-chocolate flavours of the porter, but they were more subdued. Balancing out those flavours were the hoppy characteristics of the Beechworth Pale Ale.

It was almost a black IPA and is definitely a mix I’ll be trying again. And I recommend you give this one a go.