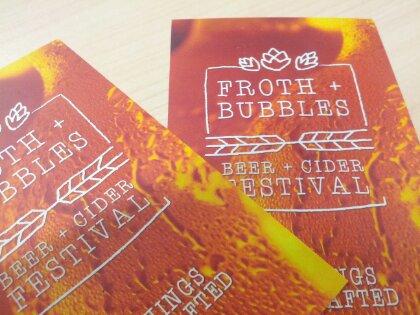 One of the worst things about being a beer geek in Wollongong is that all the beer festivals happen somewhere else.
Sydney. Melbourne. Other places in Australia that aren’t Wollongong. Even New Zealand if you want to throw in Beervana (man, I’d love to go there just once, if anyone from New Zealand tourism is reading this).

It sucks because it means having to travel there and sleep in a hotel room for a night or two. And I never sleep well in a hotel room. When it comes to the Zeds, nothing beats your own bed.

So to say I’m stoked that Wollongong is getting its own annual beer festival is putting it mildly. I’m over the moon (even if I’m likely to miss out on one of the days as I’ll be on daddy day care duties).

It’s called Froth and Bubble and it’s on at the WIN Entertainment Centre on August 23-24. One of the organisers is Dave McGrath from the Illawarra Brewing Company, a man who has seen a few beer festivals in his time. He used his experience of other festivals to design this one in such as way as to make it easy for the brewers.

For instance, the organisers will provide all the bars and other facilities so all the brewer has to do is send down their kegs a week early and turn up on the first day of the festival and start pouring. It’s a move that should prove attractive to smaller breweries who can’t afford all the set-up expenses that go with appearing at a beer festival.

For Wollongong beer geeks, that greatly increases the likelihood of some beers that have never been seen in the city before. Or maybe never been seen at all as the guys are encouraging brewers to use the festival as a launching pad for new brews if they want to.

The plan is to have 35 brewers taking part but there is scope to increase that number if more people want to join in. That’s a possibility as the festival falls into what is a bit of a lull on the Australian beer calendar. McGrath said a few breweries have already put their hands up – Prickly Moses, Feral and The Rocks Brewing Company (who might also bring down some special beers for the festival).

As well as the beers, there will be beer and food matching lunches with a brewer and live interviews with brewers that will be broadcast on the stadium’s big TVs.

The beers will operate on a token system, and punters will use a glass they get as part of their entrance fee. If they want, they can buy a bigger souvenir glass at the festival and, for a few extra tokens, get that filled up too.

Tickets are due to go on sale next week and the festival website frothandbubbles.com.au will contain that info, as well as being the place to go for updates on which brewers are taking part.

NOTE: as well as this blog, check out the story I wrote about the festival in  today’s Illawarra Mercury.