A hangover is brewing…. 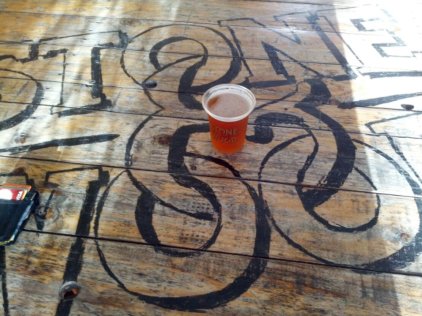 Some of the tools and ingredients needed to make Stone Beer

Some beers use two or three malts – this year’s Stone Beer has 13 of them. 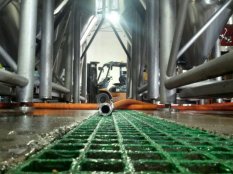 There’s so little space at the Byron Bay brewery that they’re storing fermenters outside.

The fire was started in the late afternoon and the stones put on for several hours to heat them up. 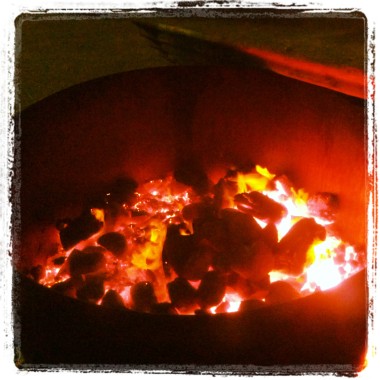 The stones are getting hotter….

Brad Rogers holds one of the glowing stones with special tongs.

The steam that comes from the kettle as the white-hot stones are put in. 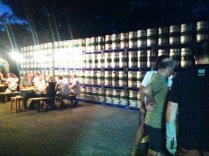 In case you’ve ever wondered, being hungover and winding country roads do not mix.

I knew that rationally but experience is the better teacher and, having experienced this, I can tell you it’s something best avoided.

I was taught by experience during a visit to Stone & Wood’s Byron Bay brewery last weekend. The reason because I scored an invite to their once-a-year Stone Beer brew day. That’s the day where they heat up a load of volcanic rocks Brad Rogers brought back from Fiji yonks ago (along with some other rocks sourced via his geologist brother) and chuck them in the boil and get them covered with caramelised sugars. Then it goes then into the fermenter and the yeast eats all the sugars off, which makes for some yummy toffee caramel characters in the beer.

I’d never given much thought to nabbing an invite to the Stone Beer brew day, figuring there had to be people more important than me to invite. Turns out there weren’t any people more important (or maybe there were but they were all busy last weekend). Also along for the ride were two other bloggers – James from Melbourne’s BeerBarBand and Darren from Brisbane’s 250 Beers. Having met James briefly last year during Good Beer Week and Darren not at all, I was looking forward to catching up with both of them.

Not long after I arrived, I headed to the other brewery in town – the Byron Bay Brewery. I was only familiar with them through the underwhelming pale lager and so wasn’t expecting very much. But I was surprised – on a hot afternoon their Billy Goat beer was amazingly refreshing for a dark lager. It was the pale ale that was the winner – like the S&W Pacific Ale, it uses Galaxy hops but has it’s own distinct character.  After trying all the beers on a tasting paddle, I ordered myself a schooner of the pale, and then head brewer Scotty shouted me another schooner of his seasonal, the amber ale called Rust Bucket.

Then there was another beer at the hotel before heading back out to find James at The Rails, one of Byron’s pubs, for a beer. Then we went to the meet-up with the Stone & Wood crew at the Great Northern Hotel even more beer.
And I think you can see where the hangover came from.

I didn’t feel smashed on the Friday night, I even chose to leave early rather than continue onto another pub with the others. But the next morning I was feeling decidedly crap (James suggested it was likely due to my alcohol tolerance being down after having a dry month in February and he’s probably right).

We headed off to the Byron Bay brewhouse to check out just how crowded it has become. Their Pacific Ale has been so popular that they’ve run out of space for more fermenters to make it – they’ve even got four out in the driveway.

Then we were off to Murwillumbah to check out their new brewery – via those winding country roads. I quickly felt rather ill; my head in my hands and a decent hangover sweat going on. I stayed in the bus while everyone else went in to look at the new brewery. The Stone & Wood crew didn’t mind – in fact they were quite nice and kept checking on me. If anyone knows what it’s like to have a hangover, it’s people who work at a brewery.

Eventually I perked up enough to venture into the brewery, and saw a whole lot of space – heaps more than at Byron. Almost enough to play brewery cricket – if you were so inclined. While there some people had a beer or two, then some more at a few pub stops on the way back. All of which were accessed by those damned winding country roads. And all of which I had to go ‘‘no thanks’’ when someone offered me a schooner of Pacific Ale.

It was a blessed relief when we finally arrived back at the Byron Bay brewhouse. Firstly because there were no more winding country roads and I could get off that bus. Secondly, because I could finally have a beer now my stomach realised we were on solid ground. One thing I wanted to do on this trip was drink a Pacific Ale at the brewery, and I did that via super-fresh beer bottled just a day earlier (I would have really liked to try some straight from the tank but thought it would be rude to ask).

Another beer or two, some dinner and enjoyable conversations with James and Darren and I’d really perked up again. I’d also managed to do my little part in brewing this year’s Stone Beer – if you drink it in a few months and think it tastes like excellent button-pushing then you can thank me. That was all my handiwork.

While button-pushing was going on inside, out on the driveway a big fire was going, heating up the volcanic rocks for the boil. It was also causing some of the concrete driveway underneath to go kabloeey too. I think there might have been some patchwork done on Monday.

As you can see by one of the photos in the gallery, these stones get bloody hot. The shot I have is of them glowing red, but there’s also a white-hot stage after that. Then one of the guys gets the hot task of picking the stones out of the fire with tongs, putting them in a big chip fryer and then dunking them in the boil kettle.

An hour and a few more beers later, it was time to take the stones out and transfer them to the fermenter. Then it was time for me to catch a taxi back to the hotel and go to bed.

And not wake up hungover the next morning.

Now I just have to wait a month or so for the Stone Beer to come out. I’m really keen to see if I can taste the button-pushing.