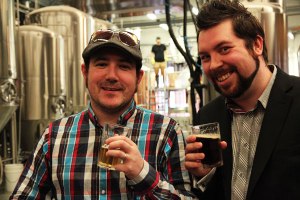 Craft Beer Crusaders
Series One: The First Crusade
Stars: Dan Hanna and Mark Iscaro
Okay, so I reckon here’s a conversation that has happened more than once. Usually over a few beers, and usually before anyone is too drunk to make sense.

Guy One: Hey, wouldn’t it be tops to make a show about beer?
Guy Two: Yeah! We could drink loads of beers for free.
Guy One: …Get to visit loads of breweries.
Guy Two: And it could all be a total tax deduction – which would mean even more money for beer!

And that’s where it all ends. Largely because they can’t be arsed actually doing it because they’re lazy. Okay, I may be projecting myself on others here.

Well, Dan Hanna and Mark Iscaro presumably had that conversation. But they didn’t leave it there. They went and made the damn TV show and got it on TV. Sure, it’s Channel 31 – Melbourne’s community TV channel – but still it’s TV.

And I’d have to say it’s better than a lot of the community TV I’ve seen when visiting Melbourne. I usually watch community TV for a bit of a laugh, especially those dodgy local footy shows where some guys in tracksuit tops sit behind a desk in their garage and talk about the goings-on of their suburban footy comp.

But Craft Beer Crusaders shows a bit of forethought as to how the finished product will look. And no-one ever sits at a desk in front of a dodgy cardboard backdrop. It’s a 13-episode series (Iwatched it on DVD as I don’t have access to Melbourne community TV), in which the pair visit 33 breweries or bars. That’s a pretty good strike rate and I can only assume they either have no jobs, or patient partners who say ‘‘yeah, sure honey, you go and visit breweries all weekend for your TV show. I’ll stay here and look after the kids and do all the housework’’.

Those lucky people who have visited most of these breweries might not enjoy the series, but it was quite informative for me. This is the first time I got to have a really good look at some of the breweries I’d love to visit but probably never will. Places like Bridge Road and Holgate.

I also liked the subtitles they run to explain a word or phrase used by a brewer. It’s unobstrusive, informs the newbies but doesn’t get in the way for those people who already know.

Where the show is at it’s best is when they interview the brewers. That’s something they really need to do a lot more of; no-one else is doing a beer TV show so any time they interview a brewer it’ll be a TV scoop.

While those interviews are informative, the guys are clearly new at interviewing people. At times they treat it as more of a conversation than an interview, interrupting the brewer while he’s talking. That’s something I used to do in my first few years of journalism until I realised that people didn’t care what I thought, they cared what the person I was interviewing thought. So I shut up more and let them talk more.

On the other side of the coin, they’re pretty good at politely cutting off an interview subject who is banging on way too long.

One thing I could do without is the shots of them drinking beers, making the ‘‘oh that’s delicious’’ face and then raving about the beer. It’s an odd criticism to make of a show about beer I grant you, but watching people drinking a beer is actually pretty boring (not to mention predictable; just like those cooking shows where they taste the food at the end. It’s a guarantee that they’re going to make that ‘‘delicious’’ face, no matter what they actually think of it).

More importantly, drinking the beer the one part of this show that is easiest for me to experience myself; I can go buy that beer and try it. What is much harder for me to do is visit these breweries and talk to the brewers. For me, that’s where the strength of the show lies – giving me information in a way that isn’t available anywhere else.

So if you’re an Australian beer geek and you haven’t seen the show, I’d recommend buying yourself a copy. Regardless of any criticism, it’s still a great documenting of the Australian craft beer scene.