Ending the tyranny of Untappd

Early last month I read a post from Jack at The Westbender about his New Year’s Resolutions (and kudos for Jack for resisting the cheap gag and not calling them ‘‘New Beers Resolutions’’. God knows that’s what I would have called it). 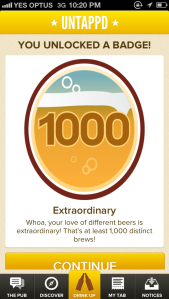 This isn’t a screenshot of my own 1000th check-in – it’s one I found online. But it looks the same as the one I got, so I could have told you it WAS a screen grab of my actual check-in and you’d have been none the wiser. All of which makes this caption somewhat pointless.

While I’m not into resolutions just because it’s the start of the year there were a few that I liked. And one that resonated with me. The one that hit home was about not being so obsessive with Untappd. I’ve blogged before about the way it has affected my approach to beer.

Sure, now that I’m not drinking at all this month, I haven’t been anywhere near Untappd, but I’d been thinking about giving it the flick since the start of the year. That I was thinking this barely three or four check-ins away from 1000 beers is an indication of the seriousness of my thoughts.

I agree with Jack that you can get obsessed about getting the next badge, or upping your unique beer tally. So you can end up drinking beers you’ve had in your pre-Untappd life – including beers you hate – just to add another one to the list. Or for ‘‘fictional internet points’’ as Jack nicely put it.

For me it also means forever seeking out new beers instead of the old. If there’s a beer I love on tap next to a beer I’ve never had before, I would always, always, always try the one I haven’t had (except if it was Two Birds’s Taco, of course – I’d drink that any time I saw it). I’d buy that beer, go find a seat and before I’d even had a sip out would come the smartphone and I’d be clicking onto the Untappd app and looking to check-in the new beer.

In the last few days before my self-imposed beer-free month of February I did have a few beers. A few new ones too. But I didn’t have my phone handy so there were no check-ins. And you know what? It felt absolutely marvellous.

It meant I got to drink the beer, without worrying about a tally or letting people know what I was drinking. Or even waiting for the app to find my beer in bars that have crap wireless connections. It was so much more enjoyable.
Which is why it’s looking quite likely that I won’t be back on Untappd in March. Or, if I am, it’ll far, far, far less frequently than it was before.

It’ll be for fun – because there is the aspect of socialising with beer geeks that I enjoy about it. But I want to do it when I feel like it. Not every goddamn time I drink a beer.

I want to enjoy a beer for its own sake. I don’t want to drink a shit beer I know I won’t like just for another point. I want to buy a beer I’ve had before and loved and not think ‘‘what a waste, I’ve already checked in this beer’’. I don’t want to see a beer someone has checked in and suddenly obsess about getting a bottle of it even though, a few seconds ago, I didn’t even know of its existence.I want to sit in the sun at the Illawarra Brewery with my wife on a sunny afternoon and not ignore her while logging in the beer I just bought.
I want to enjoy the moment, rather than trying to tell everyone else about the moment – before I’ve actually had it.

Decided to get reacquainted with this guy, now I have a record player is that works again.