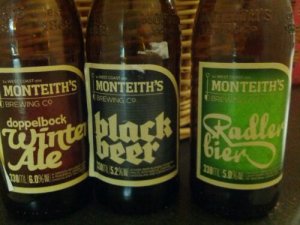 The Drinking Dan’s Dry challenge was always going to reach this point sooner or later. The point where I had to drink the Monteith beers I hadn’t yet checked into Untappd. For that was one of the rules of the challenge – if Untappd says I haven’t had them, then I need to drink them again.

But I’ve since decided to revise that rule because, frankly, it’s a huge pain in the arse to cross check every beer in Dan Murphy’s with my Untappd history. So now it’s up to me – I only need to drink the beers I have never had, rather than those I haven’t had since I joined Untappd.

But I did pick up these three Monteith beers before instituting that rule, so I might as well drink the buggers for the unique check-ins.

There was a genuine surprise among the trio. Regular readers will know I don’t have a lot of time for Monteith’s. Indeed I actively dislike the stuff they make. And I was expecting that to continue with these beers. But the Dopplebock Winter Ale surprised me – and that was even while drinking it in summer (though it was a windy night when I drank it). There is some decent chocolate aromas and flavours that come off this beer. It’s also a little watery at times but overall, it bucks the trend when it comes to my impressions of Monteith’s.

But it was back to regular programming for the Black Beer, which I found more than a little out of balance in the flavour department between the coffee and chocolate malt characters.