Britain, the United States and the India Pale Ale 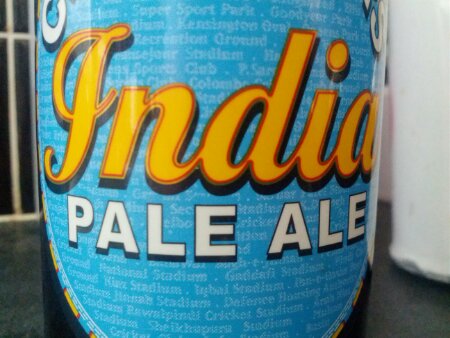 Drinking this IPA from Cricketers Arms I was struck by two things. Firstly, that it wasn’t crap. There has been a Cricketers Arms Lager that’s been around for a while and, by God it’s ordinary. And the brewery’s newly released Golden Lager isn’t much chop either. But the IPA? Quite tasty.

The second – and perhaps more controversial – thing is how breweries in the United States have stolen the name India Pale Ale. See, there are two different sorts of IPA – the traditional British version exported to India in the 1800s (I won’t go any further than that into the origins of IPA because it’s changed so much that I don’t know what’s right and what’s wrong any more) and the highly bitter US version (like most things American, it’s obsessed with being louder than all the other beers).

In my view, the United States version has come to dominate what people consider an IPA, overshadowing the original, British version. Take the Cricketers Arms IPA; when I bought it I imagined it would be bitter, piney and highly hopped. An American IPA, in other words. But it’s not – it’s a lovely, tasty, English IPA with delicious toffee and caramel flavours.

Judging by the social media comments about this beer it seems a number of other beer geeks think “United States” when it comes to an IPA. Some have also been disappointed to discover that this is the Brit version.

With me it’s not just this beer – any IPA I buy I’ve been conditioned to presume that it’s going to be a US IPA. And I reckon it’s the same with a great many other beer geeks too. It’s a bit of a bummer because it means people can dismiss good IPAs -like this one – just because it doesn’t conform to their expectations. Expectations formed by the US style of IPA – the one that is louder than all the the other beers.

They have a new album out? How did I miss that?