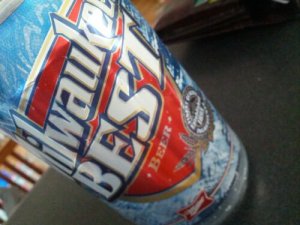 I actually know how this can of Milwaukee’s Best ended up in my parents’ coolroom. I was responsible – well, kind of.

It was sitting in the local bottle shop so I bought some. I think I might have even thought it was a bit swish because it was obviously imported from the United States. For a bit of a laugh, I gave a can to one of my brothers (who was still living at home) and said he should try it.

Popping the can I got a strong ‘‘Pffft’’ noise and a decent head pouring into the glass – like the beer had just been canned. I don’t know enough about canned beer to know whether having decent carbonation seven years later is a good or bad thing but my instinct is ‘‘bad thing’’ (for some reason I keep thinking about those pictures of fast food hamburgers that still look the same years later).

The can boasts that this is ‘‘carefully brewed from the finest malted barley, selected grains and choicest hops’’. Make of that what you will. Seven years later, there’s nothing fine about this beer. There’s nothing much to this beer either – a little bit of cardboard aroma and virtually nothing at all when I drank it. And I truly mean that. I felt like I was drinking light amber-coloured tap water. All-up, I reckon this beer has kept pretty well – this would have been exactly how it tasted seven years ago. Work out for yourself whether or not that’s a good thing.

If there is a bright spot to drinking this, it’s that I got another unique check-in on Untappd.