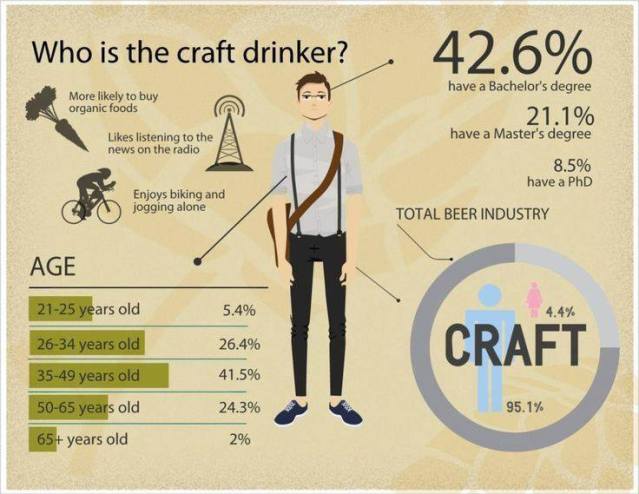 Here’s a graphic I pinched from Planet Beer’s Facebook page – they usually have some good stuff there.

But this isn’t one of those things, though I presume Planet Beer found it somewhere else on the web and posted it.  What I really don’t like is its attempt to paint craft beer fans as hipsters. I mean, just look at the trio of characteristics of craft beer drinkers at the left – we like organic food, listening to the news on the radio and biking or jogging alone.

The organic food thing is a blatant – and inaccurate- craft beer drinker stereotype. I’m surprised they didn’t include “more likely to grow a beard”. As for listening to the news on the radio – what? And biking or jogging alone – what the hell does that have to do with anything.

Then there’s the usage of the figures of uni graduates, as if to show that craft beer drinkers are more educated. The reference to the 42.6 per cent with a Bachelor degree is particularly annoying because doesn’t that therefore mean that 57.4 per cent of craft beer drinkers don’t have uni qualifications? Surely it’d make more sense to highlight that figure, given that it goes against the stereotype of the craft beer drinker. Unless, of course, your aim is to play up to the stereotype.

And if you were going to do that you might want to include a graphic of some hipster doofus. Oh look, that’s exactly what they did.

In case you couldn’t tell, I’m so not a fan of the bullshit “craft beer drinker” stereotype. I’m not cool. I’m not a hipster. I don’t have a beard. I don’t have tattoos. I don’t wear overalls. I don’t ride a fixie. I don’t shop at farmer’s markets. I don’t view my choice of beer as some sort of statement. I don’t think I’m a better person just because I drink a certain type of beer. I’m not an unsufferable snob. And I certainly don’t see anyone who resembles me on this laughable and stupid video – one that seems to encourage more stereotypes.

Craft beer is a broad church full of loads of different people,  many of whom share one trait – we all like tasty beer. Stop trying to create some bullshit image of what a “craft beer drinker” is. Hell, some of us don’t even like the phrase “craft beer”.

We’re not a marketing demographic, we’re people – so cut all this shit out. Especially if you’re part of the craft beer movement – purporting stereotypes helps nobody.

NOTE: as it turns out this was my 500th post on Beer Is Your Friend. Glad it was something with a bit more substance than some of the other crap I write here.