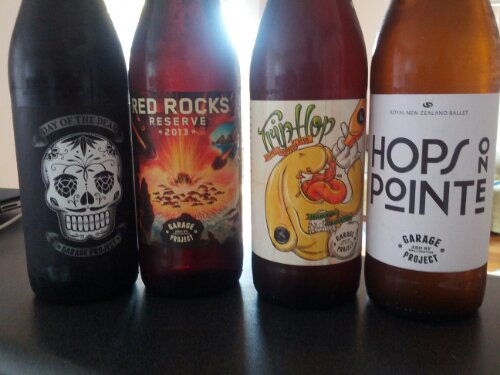 So there I was at Thirroul Cellars, looking to see if there was anything new in the fridges. Not so much in the six-pack fridges – except for Rocks Brewing Co’s The Governor in bottles. Had that on tap but not in bottles, so I thought I might get some.

But my plan of attack changed once I saw the long neck fridges up the front of the store. In there I spied, not one, not two, not three, but four Garage Project beers (check the photo above to see which ones). That mightn’t be a big reason for excitement in GP’s home country of New Zealand, or in craft beer friendly places like Melbourne, but in Wollongong, it’s huge. I don’t know of any bottle shop on the South Coast that has Garage Project in stock.

After a few seconds of deliberating which of the beers I could afford, I splurged on all four. I reasoned that it might be the only chance I have to nab these beers and I would kick myself if I missed out. So I bought all of them. Based on the two other Garage Project beers I’ve had I’m expecting good things from these four.