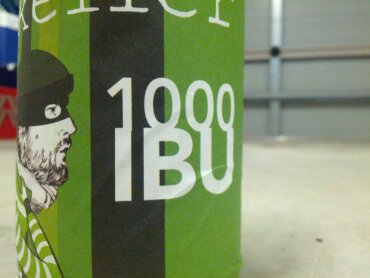 Of the trio of beers that make up this Hoppy Weekend this was the one I was most scared of.

And I don’t use that word lightly. I vividly remember the first – and last – time I’d tried Mikkeller’s 1000 IBU. It wasn’t too long after I’d started writing my beer column for the local paper and someone sent me a few bottles to review.

Among them was the 1000 IBU, all bundled up in the green paper it’s usually packaged with. I remember trying the beer in preparation for writing a review and found it so intensely, overpoweringly bitter and terrible that I had to pour most of it down the sink.

My review said ‘‘this is a very, very bitter beer. It’s incredibly powerful and lays waste to your taste buds. After a mouthful of this, you might not be able to taste anything for a while.’’ I also labelled it a ‘‘brag beer – the sort of beer you drink, just so you can say you’ve drunk it.’’

And yet, here I am, drinking it again. I will maintain that it is a brag beer, partially because of the super-bitter hype but also because it’s far too expensive to drink regularly – this 375ml bottle cost me $16.

I can remember meeting Kirrily Waldhorn, aka the Beer Diva, some time last year and the subject of the 1000 IBU came up. I said it was just overpowering craziness that numbs your tongue. She said that wasn’t true and that you could certainly taste different characteristics in the beer.

At the time I thought to myself that she was just making that up but it turns out she was right. Drinking the 1000 IBU now I can definitely note various characteristics where, last time, I couldn’t notice a thing because my palate was simply annihilated. Or at least that’s what it felt like.

This time it’s certainly strong – reminds me a little of a barleywine – but it’s by no means impossible to handle. On the nose the dominant aroma is of toffee, and on the tongue, there’s that barleywine character, very noticeable hop bitterness and an alcohol burn at the back.

What surprises me a fair bit is that there is next to no fruity characteristics from the hops. That’s a surprise because, with so many hops I’d expected some of them to at least throw some fruit flavours into the beer.

What surprises me even more is that I was able to finish the whole bottle of 1000 IBU – and it wasn’t a chore either. Sure, I drank it slow, much like a barleywine, but I always found it enjoyable.

About 18 months ago I first tried this beer and was totally overwhelmed. Now, I can handle it without any dramas. If that’s not proof that your palate can acclimatise to hop bitterness over time, then I don’t know what is.