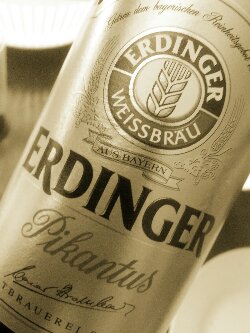 So here we are with another instalment of Drinking Dan’s Dry, where I aim to try one of every beer at my local Dan Murphy’s. The fact that Untappd told me I hadn’t had this beer before was a bit of a surprise. I like a decent hefe and other weizens, and could have sworn I’d gone through all the Erdinger, Schofferhofer and weihenstephaner varieties Uncle Dan has in stock.

But apparently not. So I’m happy to have rectified that oversight, because this is a rather tasty beer. A dunkel weizenbock, it pours a lovely burnt toffee colour and throws off aromas of caramel and banana (damn, I love me a dunkel). Those aromas are backed up in the flavour, which made me very stoked indeed.

It’s another example of why the hefe family of beers are the best.