W is for Westvleteren 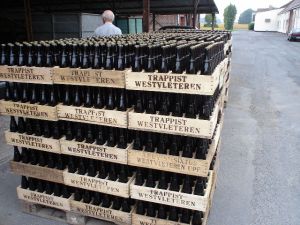 Here’s more Westvleteren beer than you will ever see in a lifetime. Unless you’re a Belgian monk – they probably take baths in the stuff.

In the world of the beer geek a beer from Westvleteren is the Holy Grail.

Which is not hard to understand why when you look at the hoops those monks make people go through to get their hands on a bottle.

See Westvleteren Brewery (lets call it Westy because I’m going to get sick of typing out that whole name pretty quickly) is the only Trappist brewery run by monks and they don’t much like to connect with the outside world. Which isn’t such a bad idea I guess – it means they’ve managed to miss out on things like Jersey Shore, Gangnam Style and whatever the hell ‘‘Harlem Shake’’ was all about.

You want their beer, you have to get it from a drive-up outlet. But, before you drive up, you have to take part in a telephone-driven lottery system. If you’re a winner, you can then drive there, have the monks check off your licence plate and then get the beers you reserved.

But don’t bother calling more than once a month because calls from the same phone number in the same month are automatically disconnected.

If you do manage to reserve some beer, you can’t nab more than a case – that’s all those odd monks will let you take home. And those monks also forbid you to re-sell their beer – but no-one ever listen to them on that score.

Maybe, they figure, ‘‘after all the crap I had to go through to get this beer, I’m going to do whatever I want with it’’.

What’s the go here?: For those who have just stumbled across this post, I’m going through the Oxford Companion to Beer (OCB) and posting an entry for every letter. Why? Because I have a copy at home but hadn’t really gone through it page by page and I figured this would be an exercise that would force me to do that.