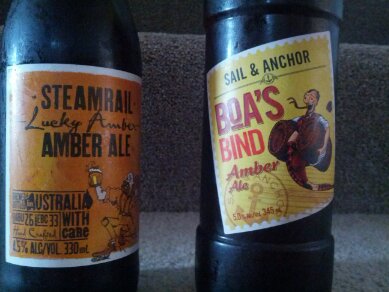 No, that’s not a typo, Coles really did call their amber ale Lucky Amber. Which makes writing out the name in its entirety look really stupid.

Oh well, at least the beer’s okay. I’m not a fan of amber ales – don’t like the nutty qualities most of them have. While Lucky Amber does have some nuttiness it’s predominantly in the aroma. On the tongue I couldn’t really find any at all.
What I could find instead is some tasty toffee notes that made this beer much easier to drink than expected.

Boa’s Bind, on the other hand, is an example of why I don’t like amber ales. Like the beer from the Steam Team, it pours a ginger colour. Unlike that other beer, however, Boa’s Bind has too much of that nutty flavour for my liking. There is some toffee-ness there too but that nuttiness, well, that turned me of this one.

The final wrap-up: That makes the score 2-1 in favour of the Steamrail beers. However, in conclusion, aside from the Gold Digger Golden Ale, I don’t reckon I’d be in any rush to drink any of these again. Too many better-tasting beers out there.