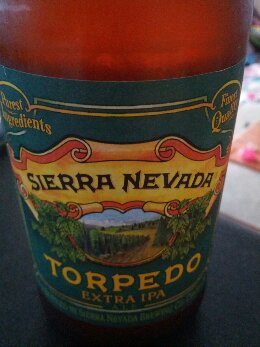 I’m not really sure what that means – do you get more IPA for your money? Is it a stronger than normal IPA? Or is it a bonus IPA you get if you buy the normal IPA?

Is it extra bitter or extra hoppy? Or does it just contain extra hops? Or something else extra.

Oh Sierra Nevada, you do confuse me so. Anyway, given that the concept behind Friday drinks here at Beer is Your Friend is to give new fans of good beer a gentle shove in the direction of a good beer, I was in two minds about recommending the Torpedo. And not because of the ‘‘extra’’ kerfuffle. Rather, it’s because a decent IPA, with all that hoppy bitterness, can be a bit of a challenge for someone relatively new to the good beer scene.

But then I thought, the Sierra Nevada Torpedo can serve as a barometer for the newbie’s developing tastes (with the ‘‘extra’’ benefit of it being quite easy to find). So they try it now and perhaps get a bit overwhelmed. Then, six months later, they try it again and find that their palate has changed through increased exposure to good beer and they can now handle this one. What was once heaps bitter and nasty is now something they can appreciate.

The Torpedo does come with a fair bit of astringency and bitterness, but I have to say that you get acclimatised to that as you make your way down the glass (either that or your taste buds get pounded so much that they don’t work so well for a while).

The dominant characteristic is that piney, resiny quality you get with a lot US IPAs – kind of like you’ve poured a glass of Christmas tree. But as far as American IPAs go, I’d reckon it’s one of the more approachable ones – and it doesn’t feel like it’s a 7.2 per cent beer either.

Incidentally, the name Torpedo is inspired by the hop torpedo that’s used in the dry-hopping process (that’s where they chuck dry hops into the fermenting beer to add some hoppy aromas). I’ll let Sierra Nevada Communications Coordinator Bill Manley explain:
‘‘The Hop Torpedo is a cylindrical stainless steel vessel that was developed to harness the essential oils and resins in hops, without extracting bitterness. The device essentially works like an espresso machine. A stainless filter basket is packed full of whole cone hops loaded into the vessel and sealed against pressure. The device is then placed in the fermentation cellars where beer from the cylindroconical fermenters is pushed down from the tanks, through the pressurised column of hops and back into the fermenting tank. The flow of beer out of the tanks, into the Torpedo and back into the fermenter can be controlled to extract different levels of flavour, aroma and bitterness.’’

New reading material. I don't like salmon but if I did, the environmental degradation of Tasmanian salmon farms mentioned in this book would make me think twice about eating it.