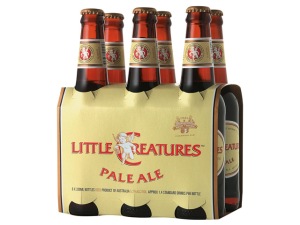 Little Creatures have announced a temporary change to the flavour of their pale ale.

A week or so ago, Little Creatures posted a notice on their website that they’d run out of Australian and New Zealand hops.
For the time being, they’d have to rely largely on US-grown hops, prompting the following piece of news:

‘‘For this reason, you might detect a bit of a lift in the citrus aroma in Pale Ale over the next few months…But fear not, we haven’t changed the recipe, it’s just the magic of these wonderful little hops at work and we’re just tinkering with things as we go, trying to bring you the best beer we can.’’

I have no criticism at all of Little Creatures for having to switch hops for a while (I actually might go buy some to see if I can notice any difference). In fact, this sort of thing highlights why I reckon brewers are more talented and skilful than winemakers.

You’d never see a winemaker seeing the need to make such a statement because no-one expects a wine to taste the same vintage after vintage. Indeed most wine geeks actually enjoy noticing the differences in a wine from one year to the next.

But brewers, even though they make each beer many more times than once a year (unlike wine), are expected to ensure that the beer tastes the same every single time.

Now that’s a little unfair because the vagaries of using ingredients that come from the soil is the same whether you’re making wine or beer. Malt and hops come out of the ground just like grapes do, so they are therefore subject to the same issues of changing flavours, crop yield and the wank of ‘‘terrior’’.

The winemaker chucks the squeezed grapes in a vat and whatever the wine tastes like when it comes out, well, that’s what this year’s vintage tastes likes. However, the brewer is expected to overcome whatever nature has done to their ingredients to create a beer that tastes the same as the one they made last month.

That’s right – the brewer has to overcome nature. How talented do you have to be to do that?

A brewer’s not really allowed to chuck in a different flavour hop because the ones they would have used had a poor harvest and there weren’t enough to go around. Nope, they still have to figure out to make the beer taste the same while not being able to use the same ingredients.

It’s something that often goes unnoticed or unremarked upon. We drink our favourite beers, that always taste the same, never really thinking about the level of skill and effort that takes.

So the fact that wine tastes different from year to year isn’t something that should impress us. It should be something that we expect. But beer tasting the same batch after batch? Well, that’s something special.

A Saturday spent making Caramlik cheesecake slice. Pretty happy with how it turned out.