What's in the fridge?

What’s in the fridge – Day six 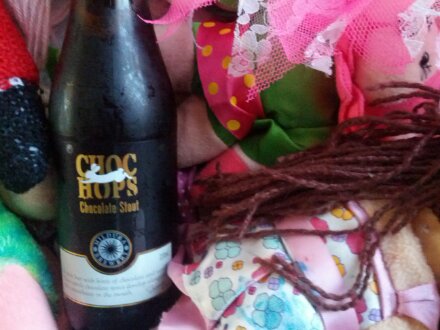 I know just how long this bottle of Choc Hops from Mildura Brewery has been sitting in the beer cellar (aka the fridge we don’t turn on so as to conserve electricity). I bought a six-pack of this last Easter as research for a column I was writing at the time about seasonal beers.I drank one or two of them and then put the rest in the old fridge. And there they stayed, stuck right up the back and very hard to see. But you know what? Even after almost a year, the beer still tastes good (is it past the best-before date? Again I have no idea because I can’t see the date stamp on the bottle. Then again, I always find those stamps ridiculously hard to find and decipher anyway).

As far as saying it tastes good, you should know that I’m more of a fan of the chocolately stouts than the roasty ones. I’ll drink the latter, by all means, but I prefer the former. And this Choc Hops (I think the Hops in the title is more a reference to the Easter Bunny than a certain beer ingredient) has some nice chocolate stuff going on.

The smell very much reminds me of the Cottee’s chocolate topping we used to have when I was a kid. That chocolate topping comes through clearly in the flavour as well, but not so obvious is the vanilla promised on the label. Maybe it’s there tempering the chocolate sweetness but I couldn’t really spot it.

Would I drink it again?: Now that I’ve found I have still got a few of these way in the back of the fridge, I think I will drink them soon. But I’m just going to wait for a cold and/or wet evening.

Categories: What's in the fridge?