Racing out for Racer 5 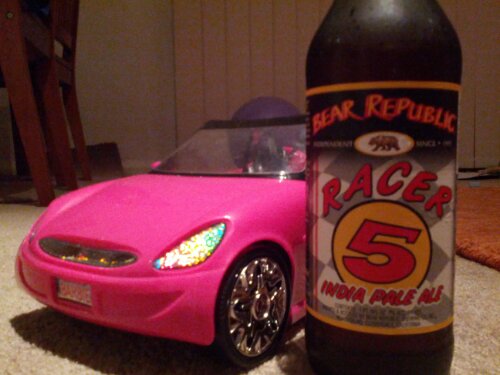 I don’t really need to keep buying beer. But I do.
Like just recently for example, I headed to Thirroul Village Cellars, to see what they had. They’ve steadily been getting a better beer selection and I hadn’t been in there for a while, so I went to check them out. In the end I bought a sixer of Coopers Celebration Ale and a long neck of Bear Republic’s Racer 5 IPA.
While I was doing this I had crates of homebrew and beer at home. So there was more than enough to last me for a bit. So in no way did I need to buy more beer. But I did.
It’s because of two things
1) The desire to try something new
2) The fear of missing out
Of course, I’m talking about the Racer 5 here, the Celebration Ale will be around for ages. I wasn’t sure whether I’d had the Racer 5 before (Untappd says no and, being an obsessed checker-innerer of unique beers I’d have surely added this one to the list if I’d had it) so I bought it because it was something new.
And because I didn’t want to leave it for a few weeks because it might not be there by then. And the I’d be kicking myself for missing that chance. See, Wollongong isn’t exactly an oasis of great bottle shops, so when you find something like this in one of them, you grab it because you mightn’t see it again.
I’m glad I did – it’s a great beer. Sure, I could have worked that out from the Beer Advocate ratings but I’ve been disappointed with beers those über geeks have rated highly. But they were right this time. The Racer 5 has a lovely citrus-pine smell (sometimes I think the word “aroma” sounds a bit too high-faluting) and those characters carry over into the flavour. Surprisingly for a US IPA the pineyness isn’t overbearing – either that or my taste buds are becoming more acclimatised to heavy hop beers.
There is even some sweet lacing that stays around on the glass – if you care about such things (yeah, lacing looks pretty and stuff but I fail to see why it’s important enough for some to mention in every single review).
Would I buy it again?: Yeah, I would. Though I’m starting to think I should be drinking the beers I already have rather than buying new ones.