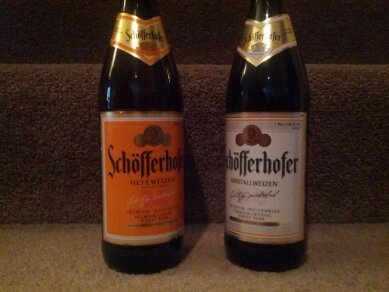 There was a time, not too long ago, where I was scared of the beers you see in this picture. Well, the beer on the left at least. At the time I didn’t know the other one even existed.
You see, my brother (who, like all the other brothers, is younger than me) would be seen drinking a bottle of Schofferhofer hefe from time to time. This was despite him not being a craft beer fan, and was a while before I could call myself the same.
At the time we’re talking about, I had just discovered Monteiths and figured it was all kinds of awesome (now? Well, I can’t remember the last time I had a bottle of the stuff). So for me, some beer with a strange German name was a bit intimidating. And that name “hefeweizen” …what sort of weirdness was that?
Anyway, about 18 months ago I started on my own craft beer journey. And not long after I learned just what a hefeweizen was (“a beer that tastes like bananas? Cool!”) and remembered my brother drinking the Schoff. So I tried one – and thoroughly loved it. In fact to this day I reckon it’s the best hefe I’ve had (if a hefe doesn’t have the banana flavour going on, I don’t want to know about it).
Of course it’s a bonus that the beer comes in 500ml bottles.
More recently I worked out what a kristallweizen was (one thing I love about beer is that there’s always something new to discover). So I thought I’d see what the Schoff does with a clearer version.
It’s good but there’s not as much banana and, in an odd way, drinking a Schoff that isn’t cloudy detracts somewhat from the enjoyment of the beer.
But the Schoff hefe? Well, that’s one of the beers I keep coming back to. Jeez it’s bloody good. Just wish I hadn’t wasted precious beer-drinking time by being scared of a beer with a weird German name.
Would I drink them again?: The kristallweizen? Not by choice but I wouldn’t complain if someone offered me one. The hefe? Yeah, I’ll keep going back to this 500ml bottle of banana and happiness.

Now that's a fancy kids menu. No nuggets to be seen.