About 18 months ago, I started writing a beer column for the Illawarra Mercury.
Before that time, I’d only delved as far into the craft beer world as the beer section of Dan Murphy’s would allow. And, to be honest, I probably figured there couldn’t be too many more beers available than that.
By crikey I was so enormously and totally wrong.
And I realised that not long after I borrowed the book 1001 Beers You Must Taste Before You Die (what a macabre title. And pointless too. It’s not like we’re going to be tasting any of those beers after we die). 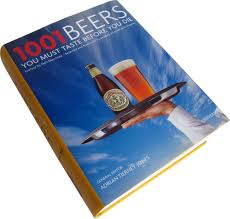 I picked it up in the name of research and discovered that, forget about trying these beers – I hadn’t even heard of the vast majority of them. How many? To be honest, I reckon I’d have been lucky to recognise 20 of them. Which, I admit was pretty pathetic for a guy who had just taken on a beer column.
But I’m an eager learner. And when the subject is tasting beer it’s hard to be anything but eager.
Anyway this week I went back to the library and borrowed that book again to see if I’d improved.
I had. Those breweries that 18 months ago were nothing more than odd or unpronounceable names – like Weihenstephaner, Mikkeller, Orval, Chouffe or Kwak – now had some knowledge, experience and taste to go with them.
I was no longer was I surprised by the number of US breweries, because I no longer thought that Budweiser was the apex of American beer.
I even knew what a lambic was – and had tasted a few of them.
Out of curiosity, I went through the book and counted how many of the 1001 beers I’d tried. Without making a conscious effort to drink my way through the list – unlike The OzBeer Baron – I’d managed to knock back 65 of the beers (and managed to own a beer glass from one of them – from Flying Dog in the US).
I reckon that’s a pretty decent effort for a guy who lives in Wollongong, quite a distance away from the country of origin of most of the beers on the list – the US alone accounts for a quarter of the listed beers.
I’m not going to bust a gut trying to drink my way through the book – mainly because I’m too lazy, but also not super-rich. But I am at least relieved that I’m no longer an clueless idiot when it comes to beer.
An idiot, maybe. Just not a clueless one.