A surprise from Uncle Dan’s

So there I was at work pulling a Saturday shift.
As you might imagine there’s isn’t a whole lot of joy that comes with 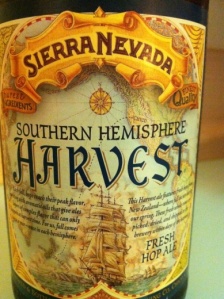 working on a day you know that plenty of other people aren’t.

To try and cheer myself up I visited the Dan Murphy website to see if Dan the man had any new beers available at his outlet near my place. I do this quite a bit and am usually disappointed because Dan’s doesn’t increase his beer stock as often as I would like. How often would I like? Well, I’m not an unreasonable man, I’d settle for three times a week.

Incidentally, to those mocking me for talking about Dan Murphys as though they’re some bastion for craft beer – shut up. I live in Wollongong, which isn’t renowned for being awash with places that sell craft beer. It’s not like Melbourne, where you can buy some limited release Mountain Goat beer from a vending machine at a train station and find a Bridge Road Brewers beer in the fridges at 7-11 (Yes, I know you can’t actually do this. I’m not a complete idiot. I’m exaggerating to make the point that good beer in Melbourne is stupidly easy to find). There are a few decent places in Wollongong but, by and large, we have to make the best of what we’ve got.
Okay, /defensive rant.

So there I am at work, checking out Dan’s website for new beers. And, they actually have one! And it’s a truly special beer! It’s the Sierra Nevada Southern Hemisphere Harvest 2012 – a 710ml bottle. A limited release, it’s made with fresh hops from New Zealand, which are picked and flown over to Sierra Nevada’s HQ in California so they can brew with them just a week after picking. It’s something they only do once a year and, living in Wollongong, it’s a beer I never thought I’d see here. But it’s here!

By God, I think I used more exclamation marks in that last paragraph than I have on this entire website. So yeah, I’m excited.

But I then have to spend the next five hours at work wishing the clock would go faster and hoping that no-one else discovers the stash and buys it all before I can get there. I briefly thought of mentioning my find on Twitter but that would have been exceptionally stupid – nothing would guarantee a run on this Sierra Nevada beer faster than tweeting about it to a bunch of fellow beer lovers.

No, best to be greedy and keep the news all to myself.

When I finally got there and found some on the shelves I picked up two and headed home. Then I put them in the fridge and waited a few hours for it to cool down. Now it has, so now I’m drinking it.

It’s not what I expected but that’s okay. Given the hopcentric nature of the beer, I was expecting there to be a stupid amount of hop flavour like other US beers. But it’s not OTT at all. There’s some good caramel flavour and understated yet lingering hopiness.

It shows me that the Americans can make a hoppy beer that also has a bit of restraint.

Would I drink it again?: Yep, which is just as well because I bought two bottles of it.