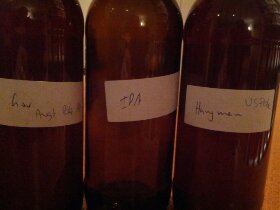 When you’re a writer and blogger about beer it can be hard to work out if you’re any good at what you’re doing. As well as this blog I’ve also been the beer writer for the Illawarra Mercury for just over a year now.
But I’ve never been arrogant enough to think that means I’m some expert on beer or anything. i reckon I’ll consider myself a beer expert when I can listen to a proper brewer talk and not once go “huh? Me no know what you say”. Right now I think I’m a ways away from that score.
But perhaps I’m a little too hard on myself. Because the Rocks Brewing Company is planning on bottling their beers. To that end, head brewer Scotty has been handing out bottled samples to people to get some feedback (that’s the unusually labelled bottles in the photo above).
And I was one of those people. I figured that he’s not going to ask for any idiot’s opinion of his beers (even if that possible idiot lives near home, as I do). They’re looking to bottle this stuff, so he’s not going to give samples to someone who responds with stuff like “this IPA thing? It’s tastes too piney for me. Do you do a lager? I like lagers.”
So anyway, enough “maybe I’m not as dumb as I thought” talk. Scotty dropped off four samples and, due to a combination of family issues and the flu, I’ve only sampled two of them – the porter and the IPA.
And I can honestly say that I’d buy both of them if they were in bottles. The porter (named The Butcher after a dodgy bigamist who lived in The Rocks back in the early days of Australia – the things you learn off a beer coaster) had a bit more coffee flavour that the divine “chocolate pudding in a glass” of the version I had a month of so ago.
The IPA sits in the middle of that style for mine. There’s a sharp bit of bitterness at the front that, surprisingly fades a bit to be replaced by a pleasing fruity/piney flavour.
So there’s the Hangman and Governor to go. The Hangman will likely get the thumbs up – my drunken memory tells me it was an impressive beer. The Governor is the one I’m most interested in trying – even though I’m sure I’ve had it before (was likely drunk to remember what it tastes like.Bet no “real” beer writer gets drunk while sampling beers).
I’m interested in it because it’s a golden ale, and that’s often the “entry level” beer breweries put on for newbies. No problem with that at all. As long as it’s still made with some flavour.
And I’ve got a sneaky suspicion the Governor will have some flavour to it.