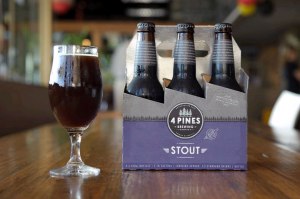 4 Pines in Manly have been tinkering with a beer that you can drink in space. I asked a few questions about their stout space beer of Jason Held, the space engineer who came up with the idea.

How did the space beer project come about?
I walked in to the bar and told Jaron “I’m going to ask you something I’ve never asked a man before in my life,” and he said, “PLEASE DON’T,” to which I replied, “no seriously—how’d you like to have your beer in space.”  That’s pretty much how the conversation went.

Who is it planned will be drinking the beer in space?
People drink in space simply because they are people and because alcohol consumption is a part of human culture.  We don’t expect people to buy a ticket to space to drink a beer.  But we do expect people will be in space, and watching our beautiful blue globe roll under their feet, and think, “wouldn’t a pint be great right about now?”
That said, we have run in to some people looking to go just because they want to have a brew there…  (http://beerinspace.com/)

Has beer ever been drunk in space by astronauts before?
There has been alcohol consumed in space before.  Wine, brandy, and vodka have been stored for special occasions.  But the reports are sporadic because it’s against NASA policy, and because the issue can be over dramatized.  I cornered the head doc for the Russian space program who said that freeze-dried cube beer was tried in the early days, but that didn’t go over very well.

Was a stout picked for any specific reason?
Astronauts can lose some sense of taste the longer they’re in space.  Also, high carbonation can cause discomfort when drinking.  Part of this research was to find the correct level of carbonation in the recipe so it’s comfortable to drink when floating.  The stout has a strong flavour and the 4-Pines recipe in particular was very stable when changing the carbonation level.
We originally wanted to try a Russian Imperial (to go with the Vostok name and as a salute to Yuri Gagarin), but the Irish style had more “wiggle room” when designing carbonation levels.

Are you guys the only ones in the world developing a beer to be drunk in space?
As far as we know, yes.  There have been other beer related experiments though.  One company brewed a test-tube of beer in space, but the focus was on brewing process, not the recipe itself, and nobody in their right minds would limit their drinking to a single test-tube. Another company brewed beer from barley that was the great-great-great-great grandkids of a set of barley grown in space…which is cool until you realize you just spent three times the cost to drink a normal pilsner style beer on Earth which is undrinkable in space.

Aside from simple enjoyment are there any other benefits to being able to drink beer in space?
Beer has shown mitigation effects for bone loss and radiation damage here on Earth.  Bone loss and radiation are the two biggest health challenges of long duration spaceflight.  If drinking moderate amounts of beer in space has the same effect then NASA should re-think its no-alcohol policy.

What are some of the problems when it comes to drinking beer in space?
Beer aficionados will notice two differences when drinking in space. First, the sense of taste is reduced due to mild swelling of the tongue. Second, drinking beers can be uncomfortable—bubbles do not rise to the top, because there is no “top” in space. Gasses and liquids don’t like to separate. So if you have to burp, you will burp both beer and bubbles

Out of curiosity, what would happen if someone got drunk in space?
Nobody knows.  Unless there’s an astronaut or cosmonaut who isn’t talking.  Part of our research is to see if there are changes in alcohol absorption rates in microgravity.

You’ve done some tests in parabolic flights – how have they gone?
The last test validated the carbonation level in the beer and showed we have the right recipe.
We got some data on alcohol absorption and other medical stuff but with only one drinker, so we can’t say have anything conclusive about alcohol effects yet.
Our next flight is to get more data, with the same recipe, and to test a special beer bottle that was designed at Saber Astronautics to make it easier to drink in space in the same way we do here on Earth.

How much difference is there between the 4 Pines Stout we can drink here on Earth and the one that will be drunk in space?
It’s the same recipe, albeit some tweaks to carbonation level.  The stuff for space tastes the same, albeit a little less bubbly.

What sort of deadline is there for the beer – when do you think these commercial flights will be happening?
Virgin and XCOR both have advanced spacecraft undergoing various stages of flight testing.  I’d say two to four years.

Is it being developed for a specific space flight company or rather as a product that any potential companies could use?
This is just for fun, for science, and for everyone.  We’re not commissioned by any company or government body.