Why did they bother? 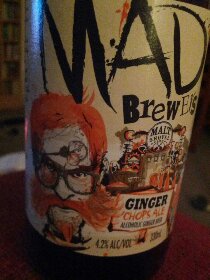 I don’t understand why alcoholic ginger beer exists. See, to me there’s absolutely no difference in taste between the alcoholic version of ginger beer and the soft drink your kids can buy down at your corner store. So I don’t see what the point of it is – unless you’re a 15-year-old girl wanting something sweet to get drunk on.
But for the rest of us, why spend the money on an alcoholic beverage that tastes exactly like a soft drink?
Now the James Squires Mad Brewers skunkworks had joined the alcoholic ginger beer party, with the stated aim of creating a “real” ginger beer. Again, I don’t understand why this exists. Mad Brewers have tended to create new takes on beers, have done things a little bit different. But here, they’re just jumping on a trend. And it’s a big mistake because this is a very, very ordinary beer.
And I use the word “beer” very loosely. This is like drinking lightly carbonated ginger ale. And why drink an alcoholic beverage that tastes just like a soft drink?
Mad Brewers, I am very, very disappointed in you.
Would I drink it again?: Nope. In fact I’m glad I bought a single bottle rather than a four-pack because I’m not stuck with three other bottles of this taking up space in my beer fridge.