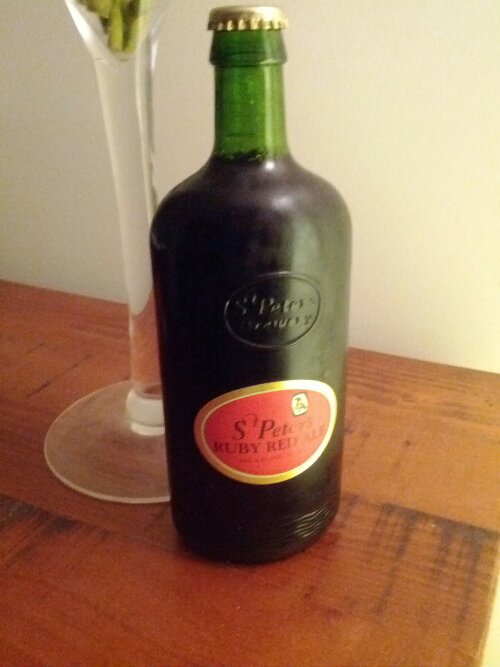 Before we get to the review of St Peters Ruby Red Ale from the UK, I’d like you to look at the photo for a bit. My wife, unimpressed with my crappy photo-taking in earlier posts, decided to take it upon herself for this one. The result you see was chosen after more than a few other attempts were discarded by her. Which is a lot more attempts than I usually take (in focus? Good enough for me!). So look at the photo for a bit. Maybe even leave a nice comment about it.
Anyway, onto the beer. I picked this up about six months ago with a Dan Murphys gift card I got for my birthday. And I haven’t drunk it before now because of the frigging weird bottle. I just found it really off-putting, looks like a medicine bottle. And anything that comes in a medicine bottle doesn’t scream “drink me! I taste so damn awesome!”
According to the label on the back the bottle “is a faithful copy of one produced c.1770 for Thomas Gerrard of Gibbstown, just across the Delaware River from Philadelphia”. So what does a bottle from the US have to do with a brewery in the UK? Nothing it seems, more than the fact the brewery has the bottle in a glass cabinet somewhere.
Weird.
So the beer in the glass is a nice ruby red colour, meaning the name is accurate (though, when I logged onto untappd to include the beer, it says it’s a brown ale. Huh?). There’s a nice slight cherry aroma on the nose and on the tongue. As for the taste, there’s a lot of nice, spicy hoppiness. And things would be fine if that was the dominant flavour but there’s also a strong maltiness that competes with the hops too much. So the whole thing becomes a bit overpowering.
Would I drink it again?: Between the weird bottle and the overpowering hop/malt combination I’d have to say that’s a big no from me. But, that’s a nice photo up there, isn’t it?