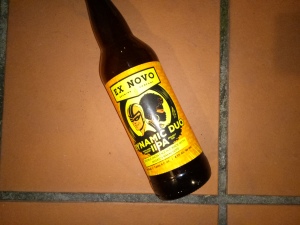 1) I do envy my brother. At the moment his job means that he has to fly to Portland on a regular basis. Sure, there is the huge downside that he’s away from his family for a week at a time – and that sucks. But, after work, he would at least be able to drown his sorrows with a few beers from one of the premier brewing locations in the world. I’m envious because I’d love to go over there but it seems extraordinarily selfish to say to my wife, “hey, let’s have a family holiday to Portland so I can go to the breweries. Dunno what you and the kid will do.”

2) Turns out there’s a bar not far from his hotel that has Pliny the Elder on tap. Can you imagine that? One of the most-sought after beers in the world, a beer that gets posted on social media feeds anytime someone here manages to get their hands on a bottle (“hey look what I have and you don’t. Sucks to be you, huh”). And he can go to that bar and choose Pliny the Elder for a knock-off beer. So jealous.

3) Yet he hasn’t forgotten his older brother. He says he’ll keep an eye out for a bottle of the stuff and bring one back for me. When he’s over there he’ll send me SMS messages that include photos of beers, asking if I want him to bring one back for me. Of course I say yes. But I have a sneaking suspicion that, if the situation were reversed, I might not be quite as thoughtful. I fear I’d get so absorbed in the world of new beers and completely forget to bring some back for anyone else.

4) One of the photos he sent me was of a double IPA called Dynamic Duo from Ex Novo Brewing Company. The brewery itself is a bit unusual in that it wasn’t designed as a money-making venture. There’s a blurb on the label that reads “Our mission is to donate 100 per cent of net profits to charitable purposes.” Which is really nice of them – kind of like a non-profit brewer. Outside of Trappist breweries, what other brewers set out to give away their profits?

5) The beer itself was great (I even love that label). Because my brother brought it over it was heaps fresh – unlike other imports that spend yonks on ships to get over here. It’s made with Mosaic and Rakau hops and throws a strong sweet pineapple aroma. The palate is pineapple sharpness and sweetness, wrapped up in some piney bitterness. The real surprise was the 8.5 per cent alcohol count. Given the US fondness for stupidly high ABV beers, I’d expected a double IPA to leave the 10 per cent mark in the dust. But this beer didn’t – it’s gone for balance over booziness – which is a good thing.

Free or paid for?: Well, this beer was paid for. But not by me. My brother shouted me, which was rather nice of him.