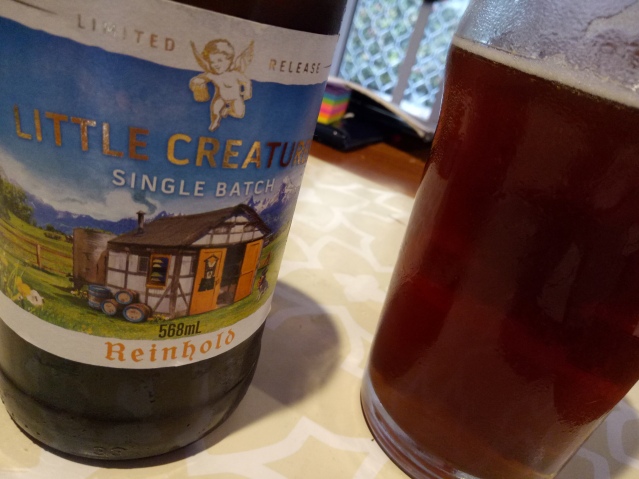 1) I’ve been in this beer blogging caper for quite a while – this damned site is into its sixth year. After that long you start to think you’re pretty switched on when it comes to beer, that you know all the stuff. But then fate laughs at your impertinence and puts you in your place.

2) It did this to me last weekend, via a bottle of the latest Little Creatures Single Batch. Called Reinhold it’s a “sticke altbier”. I’d heard of altbiers – even though I couldn’t tell you what one was (to this day when I see it, my first thought is that it’s short for “alternative bier” – but that’s just stupid). But a “sticke altbier” just sounds like a made-up word, as though the guys at Little Creatures are just taking the piss.

3) But the computer says no. It’s a real thing , apparently. “Sticke” means “secret” in some German dialect and was something brewers made for themselves before eventually realising “hey, we should sell this stuff”. And so they did. As for the Little Creatures’ media release claim that sticke altbiers are “never brewed the same way twice”, well, that just sounds ridiculous.

4) The Reinhold has been touted as the German relative to Little Creatures Rogers’ Beer (which is an amber ale). That was a beer that I loved when I started out on the better beer journey. But, these days, well I’ve gone a bit cold on it.

5) And I’d have to say I felt a similar reaction to the Reinhold. I poured the whole bottle into a pint glass – and soon regretted it. At 6.5 per cent and with loads of sticky toffee and biscuity flavours, it’s not an easy drinker by any measure. It probably didn’t help that I was drinking it on a warm day; though spring seems a curious season to release a beer (I’d have thought autumn would be a better fit). While there wasn’t anything technically wrong with it, I couldn’t make it through the whole pint – and I managed to drink a whole pint of The Dreadnought.

Free or paid for?: I got a free bottle of this in the mail.

Damn, Spotify has a playlist for damn near everything.