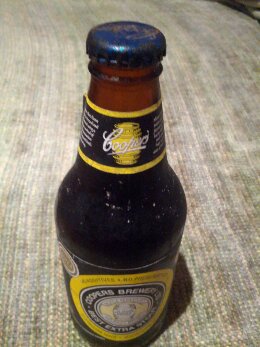 In this whole week, this bottle of Coopers Best Extra Stout was the swiped old beer that I was most looking forward to trying.

It’s Australian, which meant it didn’t have to travel as far to end up in my parents’ coolroom when compared to the other beers in this week.Also, it’s a stout and it’s my understanding of old beers that the more hefty they are to begin with the better their chances of remaining tasty for a long time.

As for how long this beer would have had to remain tasty I can only offer a ballpark guess as I could find no date printed on the bottle. The label mentions medal wins in 1994 and 2000, so it can’t have been bottled before 2001. As you can see from the photo, the stout has a blue cap, which I found sufficiently odd to contact the Coopers guys through Twitter.

Someone from their end replied, telling me the South Australian brewery stopped using blue caps in 2003. Which means the beer was bottled somewhere between 2001 and 2003, making it between 10 and 12 years old.

Pouring this almost-a-teenager beer, I could see it was still the black colour I expect from the Coopers stout, and the yeasty floaties were very evident. Licorice was very apparent on the nose. To my great surprise and disappointment I found the flavour to be thinner than I remember Coopers stout being, and a bit watery too.

Also, there was an odd dusty flavour that I picked up right at the back of my tongue as the beer headed down my throat.

So not what I was hoping for.