Not all Mexican beers are crap 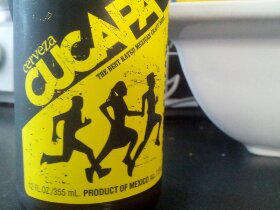 Mexico doesn’t have a sterling reputation when it comes to beer. That’s the sort of thing that happens when you’re responsible for Corona which, if it isn’t the stupidest beer in the world , is certainly in the top 10.

I mean, really, if you have to add a lemon to the beer so it has some flavour, doesn’t that tell you something about the crapitude of the beer?

I do admit that’s it’s a tad unfair to judge an entire country’s brewing output one one crappy beer but that’s hardly my fault. I live miles and miles (and even miles) from Mexico so it’s very rare to see any beer from that country in beer fridges over here. If I saw one I’d buy it, just to see if those Mexicans can do something other than crappy, watery lager.

Anyway, I did see one. I bought one. And, as it turns out, those Mexicans can make a good beer. It comes from the Cucapa Brewery and is called Runaway IPA. The name “is a homage to the travels of so many people that came to the US for a better future”, according to the label. I take that as a tongue-in-check tribute to those Mexicans who sneak across the border and into the US. It’s probably true – they’ve also got a beer called La Migra, the Spanish name for the immigration coppers.

The beer uses four different kinds of hops, but doesn’t say which ones. But they’re the fruity ones, because this tasty beer as some underlying flavours of citrus, grapefruit and even a hint of mango. I say “underlying” because the instant hit you get when tasting the beer is a strong bitterness. It’s an IPA that’s very much influenced by its northern neighbour.

Really, if you’re going to choose to drink a Mexican beer it’s no contest. Runaway leaves Corona for dead. But really, most beers do.

Read this last year and loved it so much I'm reading it again. The best Beatles book I've ever read.